No products in the cart.

It was another brutal year for the hospitality sector — for hotels, restaurants and bars. It began and ended with Covid waves that engulfed them in closures and curtailments. For 12 months proprietors and staff battled hard to keep the show on the road by any means possible, adapting to alfresco dining, switching to offering takeaways, installing partitions, checking vaccination certificates and implementing sometimes arduous measures to keep staff and customers safe.

Yet time and again while reviewing restaurants, instead of gloom, large helpings of stoicism and determination were to be found, along with cheerfully served high-quality food in venues across the island, when there were surely days when all concerned felt more like flinging plates against the kitchen wall.

Everyone is banjaxed, so let’s keep this look-back grand and simple — an A to Z (minus X, as I ate no xylophones) of things that gave this reviewer food for thought in 2021. Nothing too serious, though — after all, it’s still the (allegedly) festive season . . . A — Avocado, once a hipster staple added to everything bar coffee, quietly vamoosed from many menus in 2021. There’s no such thing as guilt-free guacamole when the main ingredient is linked to deforestation and water depletion, and racks up a carbon footprint almost as huge as that of various globe-scorching billionaires.

B — Beetroot, by contrast, released from languishing overpickled in jars, proliferated. Healthful and home-grown, this sturdy, versatile veggie turned up in all sorts of guises, from chutneys to sorbets and curries.

C — Covid certificates expedited the return of indoor eating and drinking, and responsible patrons swiftly learnt to steer clear of the more cavalier places run by pound-shop Bravehearts whingeing about “freedom”. Alas, C is also for closures, and among the restaurants that rolled down their shutters in 2021 was the much-loved Coppinger Row in Dublin city centre.

D — Dede at the Customs House, in the sea-dog haven of Baltimore in west Cork, provided one of the loveliest outdoor spaces for alfresco dining. The prodigious, delicious black sole alone was worth the journey from the capital. E — Éan in Galway city was one of several new ventures that bravely opened for business during this most difficult of years, reflecting the growing appetite for small-plate dining. Don’t miss the squid toast, or its superb sourdough.

F — Fish was not only extremely popular, but increasingly chefs were trawling the market for produce other than the ubiquitous monkfish, cod and scallops, with the lesser-spotted pollock and ray both providing memorable main courses at Goldie in Cork and the Pier House in Howth.

G — The Garden Room at the Merrion Hotel could have done without the blaze of publicity sparked by a political furore over a party held in it last summer, but it’s an elegant spot for grown-ups — even those among us not funded by the taxpayer.

H — Howth Pier is a pescatarian’s paradise: on one side are trawlers groaning with fresh catch, while on the other is a fleet of fantastic seafood shacks and restaurants, all a short stroll from the Dart. The bay’s other harbour, Dun Laoghaire, could sorely do with a similar set-up, if only the town wasn’t mired in political ineptitude/apathy/infighting. 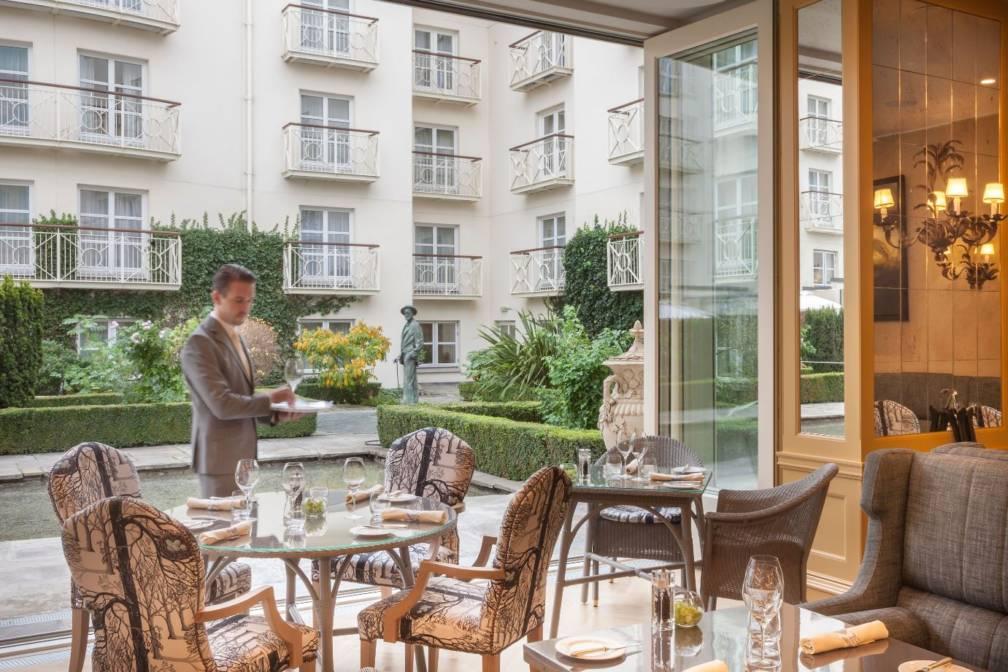 The Garden Room at the Merrion Hotel, Dublin
NIAMH MOLLOY

I — Italian cuisine, hearty and cheering, was the comfort food of 2021, particularly the burrata eaten in the rain at I Monelli in Portobello, and the pizzas at Little Forest, Blackrock. And one would hotfoot it to Stoneybatter at 4am for a helping of Grano’s delicious Scalda’nduja slathered on toast. Bellissimo!

J — Junk food was perfectly acceptable on the days when the Covid collywobbles took over. Sometimes grease is the word.

L — The Liberties was the location for the best Dublin meal of the year, at Variety Jones on Thomas Street. A Keelan Higgs meal is an elegant symphony of tastes with a bit of rebellious punk on the side. M — Mescan was one of the best Irish craft beer brands I sampled in 2021. Brewed in Westport using water from a spring under Croagh Patrick, the range — particularly the Seven Virtues trio — is pure ambrosia of the gods.

N — No-shows. A plague on all your houses. Show some manners and cancel in a timely fashion please.

O — The Olde Glen in Donegal provided 2021’s most memorable meal outside the capital. Ciarán Sweeney, formerly head chef at Forest & Marcy, conjured up the dish of the year, transforming fermented potato bread, bacon and cabbage into something new and delicious.

P — Potatoes kept cropping up in a variety of colours — purples, blues and so forth — but they mostly tasted like, y’know, spuds. R — Rasam in Glasthule uses the freshest of fish, fowl and meat — plus its own spices and baked breads — to provide truly top-class Indian food. Be sure to try the sumptuous naan.

S — Seaweed is another ingredient that had a busy year, and not just in food. One of the best discoveries of 2021 was An Dúlamán gin, suffused with seaweed and the salty tang of the ocean, by way of Sliabh Liag distillers in Donegal.

T — Travel, for many of us this year, still involved staying in Ireland, but there are many restaurants worth hopping in the car or on a train for. One of them is Thyme in Athlone — a relaxing spot with quality food and spectacular desserts. Grainne O’Keefe is the chef-owner at Mae
BRYAN MEADE

U — Umbrellas are important. If, heaven forfend, we all end up once more dining al freezing fresco this winter hopefully proprietors will pay proper attention to the quality of their coverings.

V — Vegans and vegetarians are no longer an afterthought on menus. Increasingly restaurants are offering completely meat-free menus alongside chow for carnivores. The excellent Sage in Westport is an exemplar.

W — Women chefs are on the march, making serious strides in what has for too long been a male-dominated business. White chapeaux off to Grainne O’Keefe, whose new venture, Mae in Ballsbridge, has already received the thumbs-up from Michelin, and Aishling Moore at Goldie in Cork city, who landed a Michelin Bib Gourmand last January.

Y — Yeast was box-office, and even a sustained lockdown of sourdough baking didn’t diminish the national appetite for beautiful bread. The pumpkin bread with cloud-light ricotta and pumpkin seeds served up at Potager in Skerries was worth the mortification of getting hopelessly lost in my own county en route to the place.

Z — Zen is what’s needed for restaurateurs and their staff right now. Oh, and bookings for spring, the mass purchasing of gift vouchers and some robust support for takeaway and food kits. We all need a helping hand every now and zen.
# News